Brown & Black Folks' Burden: a conversation at The Kitchen Table 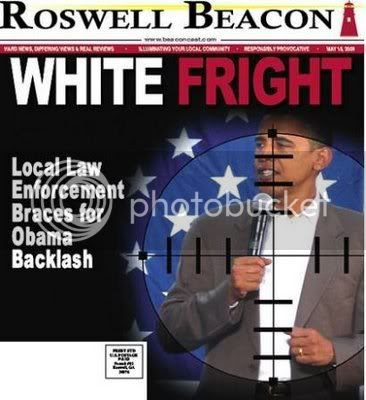 I hate this image. I hate what it signifies... what it represents.
No... it's not hate I feel... it's fear. And sadness.
This morning, I read another important blog post entitled "Bearing the Burdens," which is a commentary on two male white supremacists recent plot to assassinate Senator Barack Obama. The blog post is by Kitchen Table writer, Dr. Yolanda Pierce.
Please read the original blog post to which I responded here.
I thought it useful to share my blog comment with you (I will update the post by adding a link that defines/further explains the concept of U.S. neo-imperialism -- if I can find out):
Dr. Pierce,
Thank you so much, again (and over and over), for providing new perspectives on issues that pervade mainstream media discourse.

You have given me many new things to think about -- racist-xenophobic "he's a terrorist that pals around with terrorists" accusations vs. present day and historical U.S. American terrorism carried out through white supremacists.

White U.S. Americans really have inherited a history -- particular to them as white people -- that has left so much blood on their hands -- not because they themselves committed the mass murders, the mass lynchings, the mass rapes -- but because they are the beneficiaries of that brutality -- brutality that is absolutely central to the power and privileges that they unknowingly access everyday as white people -- brutality that is absolutely fundamental to the United States government's supremacy in the world today.

And your questions -- your questions are so powerful -- they really resonate with me: why must black people and people of color in general bear the burden of "responsibility for positive change and growth" in the U.S. Why do so many black people and people of color have to die in order to resist oppression... in order to liberate themselves -- or in the process of seeking liberation (cuz we don't always get it, right).

Great questions. Thank you for giving them to me.

The perspectives you share here have influenced the way I also see the U.S. government's military activity in the present and the privilege and power of being a U.S. American.

The U.S. is, indeed, the wealthiest and most powerful country in the world. And as you well know -- as the Kitchen Table blog testifies to over and over again -- not all people living in the U.S. wield the same brand of power and privilege as a U.S. American/permanent resident of the U.S. -- most of us are involuntarily and voluntarily complicit in the oppression of so called "Third World" people/people living in low income countries.

The U.S. government -- in Afghanistan and Iraq -- continues to engage in what I view as the legalized, government terrorist killing of civilians to achieve neo-imperialistic aims (such as the establishment of economic power/dominance in a region). In Afghanistan and Iraq, the U.S. gov't wages a war of "liberation" on brown bodies -- many of them innocent of "terrorist" crimes. And those violently resisting or non-violently enduring the U.S.'s neo-imperialistic war -- they too bear "so much responsibility" -- too much responsibility -- "for positive change and growth in" their own countries.

I believe your important and insightful questions also apply to the suffering and deprivation of resources that brown and black people experience and endure so that most U.S. Americans (and all people living in so called "First World"/high-income countries) can access the privileges of running water, electricity, gas powered cars, cell phones, IPODS etc., -- "why must" their "bodies... always have to serve as pedagogical sites; why are we always tools of liberation and resistance? Why is the fight for human freedom disproportionately borne by those who have been most denied that full humanity?"

Your next statement also applies to worldwide power imbalances as well: We "live in a country in which white Americans" and U.S. Americans of color "have disproportionately benefited from the uncompensated labor of black" and brown people in countries populated by severely poor people around the world -- including countries like Afghanistan and Iraq [I am aware that these countries include a significant middle class but it is important that these regions also include a large number of extremely poor people -- poor in a way that *most* (thought not all) U.S. Americans will never know/experience].
[UPDATE: In this way... all U.S. Americans/permanent residents living in the U.S. -- particularly middle and upper class people and most especially the millionaires and billionaires who comprise the U.S.'s (and the worlds) wealthiest 10% -- we all have blood on our hands... the blood of brown and black people oppressed, suffering and assassinated by the U.S. government's neo-imperialist/globalization driven wars and economic imperialism in overseas regions carried out through the corporate exploitation of overseas laborers so we U.S. Americans/permanent U.S. residents can comfort ourselves with countless luxuries (that we do not realize are luxuries!).
Most of us take these luxuries for granted -- the luxury of turning on a faucet, for example, that will provide us with water to wash our hands or shower (perhaps with organic designer soap that 100s of 1000s of people living in the U.S. and millions of poor people living in other countries could never afford), or the luxury of flipping a switch to brighten a room. Or the luxury of sending text messages through a cell phone (or sending emails through a Blackberry or sidekick) .
Cell phones use a mineral called colton, which is mined in the Democratic Republic of the Congo. The mining of the colton that makes our cell phones work yields profits that fund a still raging 3 year civil war in the Congo. In "Guns, Money and Cell Phones" Kristi Essick says that "more than 20 international mineral trading companies import [colton and other] from the Congo via Rwanda."
Your cell phone and mine has blood on it.
Yet, I am unwilling to give mine up even though I don't need it -- not really.
And I feel guilty about that, which is the least I could do considering unknown numbers of people were murdered, so I could enjoy the privilege of having a cell phone. Feeling guilty for the privileges and power one access at the expense of other people is not necessarily a bad thing.
Guilt is useful if we use it to admit complicity in oppression -- both voluntarily and involuntary -- and take responsibility for what we know we do and what we don't know we do to oppress other people. Guilt is useful if we reject defensiveness and denial [common, unproductive reactions in people who are told they are complicit in race, gender, class (etc.,) oppression] and instead use the new knowledge to grow our consciousness of anti-oppression issues and reduce our participation in oppression in the ways that we choose to. If you are a U.S. American/permanent U.S. resident -- it isn't possible to completely eliminate one's participation in the oppression of poor people around the world. For example, if you live in the U.S. it would be difficult to avoid eating food that was cooked using electricity, or sitting at a table in a fast food restaurant that wasn't wiped down with a rag dipped in running water.
We can, however, give up some things -- like our cell phones, our we can bike/take public transportation even some of the time instead of driving. We can choose to eat less meat products and more vegetarian products (being able to choose what we want to eat is another largely unrecognized privilege -- millions of people can't choose the foods they eat because they must eat what's available to them. Many Haitians, for example, eat rice today, rice tomorrow, and rice the day after that... rice is their only meal -- really). We can decide that a diamond ring engagement is not that important after all -- not when the slave labor and murder of people living in Africa was used in the process of getting that diamond on someone's finger (and no -- I don't believe the diamond industry can guarentee that the diamonds they sell are not bloody no matter what popular media institutions -- led by the rich friends of rich people who run the diamond industry -- want me to believe).
More importantly, we can seek change on the level of policy making/government and in corporate U.S. America. For example, we can organize a group of people -- no matter how small -- to demand that the Senator in our state use her/his power to demand that Congress/the president force corporations to stop using the labor of children overseas and start paying overseas workers a decent wage (so children wouldn't have to work to supplement their parents' meager wages). We can demand that corporations stop using violence and encouraging the use of government violence to discourage overseas workers from organizing unions. ]
Again, thank you for this blog post.
Posted by butchrebel at 8:18 AM