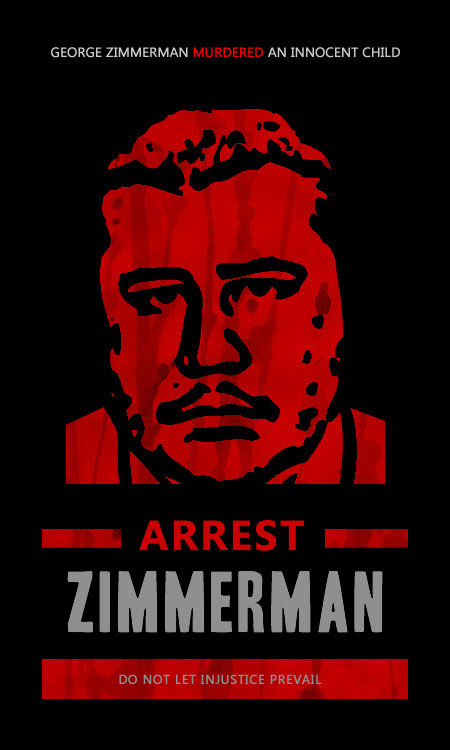 White privilege manifests in both benign and egregious acts of racial terror.
Because no matter how disenfranchised the white person -- no matter how poor, how oppressed under sexism, and heterosexism -- Becky, Brad, Bobby-Jean, and Billy-Joe never look "suspicious" enough to warrant being shot dead by police, civilians, who sometimes are not arrested, and who frequently, are acquitted for their crime/s against innocent, unarmed people of color.
Whiteness is so powerful that Tea Party whites can demonstrate in Washington D.C. -- the site of an inner-city -- openly brandishing weapons without provoking the rabid anxieties of locals who bawk about "gangs" (of whites) over-running their hood and threatening their lives -- without drawing local SWAT teams hurling tear gas, wielding batons, and killin' crackas.
Whiteness is so privileged... 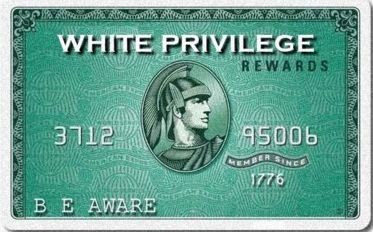 that imagining the racial inverse of the Trayvon Martin murder -- where a black man in Florida -- in any fucking state -- stalks a white teen, shoots him to death in cold-blood, and walks away without even an arrest -- it's almost pointless to invoke the scenario -- because, in this country -- that shit would never happen. It doesn't happen. Ever.
Whiteness is so privileged and powerful that it is deadly.
Her are the 911 calls related to the murder of 17 year old Trayvon Martin, a black male, pursued and then shot by white Hispanic George Zimmerman, self-appointed vigilante, for "looking suspicious" in a "hoodie."
(Scroll down the hyperlinked page to find the four 911 recordings).
Zimmerman said Martin had "sump'in in his hand". Was it before or after gunning Martin down that Zimmerman learned Martin wielded a dangerous bag of skittles and a can of Iced Tea? The most damning impetus for Zimmerman's concern, though, wasn't so much Martin's hoodie -- it was that Martin donned brown skin.
After listening to these calls, I am left to conclude only one thing -- and, yes, my conclusion is flooded with emotion and my exhaustive knowledge of the U.S.'s history of white terrorism -- legal and extra-illegal.
Zimmerman is an evil man.
Not because he's a sociopath, or a psychopath, or a serial killer (although he may be) -- and well, he won't become a serial killer of "suspicious" looking blacks, if justice is served, and Zimmerman is charged, arrested, and tried for murder.
Zimmerman is evil because Trayvon's life meant nothing to him.
As Zimmerman gazed down on the corpse of a 17 year old black male... what did he think? What did he feel? Did his heart hurt, because he stole a life? I doubt it. Because as he said in his 911 call, "They... these assholes...always get away with it."
Who is "they" George?
Well, you got one "asshole" didn't you. That asshole ain't never gettin' away again. Ain't never gettin' away to a family dinner, his high school prom or graduation, his first college classes, his college graduation, his first post-college job interviews, his wedding, his child's birth, his child's first birthday party, his child's graduation. Cuz you got that "punk," George.
And, what do Trayvon's parents get? To bury their son.
(hyperlink to Anderson Cooper video)
He's evil because he ignored neighborhood watch guidelines that stipulate civilian watchmen should not carry weapons, nor should they confront "suspicious persons" -- even if they're black.
To me, Zimmerman's evil lies in his egoism, arrogance, delusions of grandeur, willful disregard for the law, his pattern of pursuing "suspicious" blacks, his disregard for particular human lives (not all of them -- white lives are worthy), and the fact that he wanted to hunt Trayvon. The dispatcher told him "no need to do that [follow Martin]." Zimmerman was on the hunt. And now, a mother and father's child is dead. And he ain't comin' back. An evil act by an evil man.
Zimmerman is also a racist man.
Zimmerman's father and neighbors have defended Zimmerman's actions -- his father said that his son was defending himself from Trayvon -- who was 100 pounds lighter than he, and not carrying a weapon, only skittles and iced tea. He also says that Zimmerman is not a racist. The circumstances surrounding Trayvon's death, Trayvon's dead body, and the ensuing police department cover-up or mis-handling of the case, suggests otherwise.
Yes, papa Zimmerman. We are that stupid. Your son stalked a 17 year old teen because he perceived him as black, and therefore suspicious, as someone that does not belong in Zimmerman's "nice" white neighborhood. But he's not racist. That's not racist.
Do I even need to ask why Sandford police decided that Zimmerman had the legal right to defend himself from a teen less than half is size, a kid branding snacks when confronted by a man with a gun. Didn't Trayvon Martin have that same right?
(VIDEO: hyperlink includes audio of Trayvon Martin's cell phone call to his girlfriend)
The man confronted Trayvon WITH A GUN. Sounds like grounds for self-defense to me.
Here is one witnesses televised testimony.
She "assumed he [Zimmerman] was going to be arrested. Common sense will tell you. And, he wasn't." 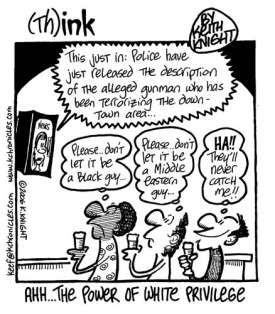 As stated in the NBC news report (hyperlinked above), legal analysts say that Florida's "justifiable use of force" law (thanks for that Gov. Jeb Bush! Dick) does not justify Zimmerman's murderous actions, because the 911 dispatcher instructed him not to follow Martin.
Excerpts from another 911 phone call:
"He was sayin' 'help!' Why didn't someone come out and help him!"
"They just said they shot him dead! The person is dead laying on the grass!"
"I don't want to be a witness or anything. I'm just scared."
"It's a young boy... I've never seen anyone killed."
"I'm too scared to live here."
"I would have helped if I could of." (crying)
Well, nice white lady, you will never look suspicious enough to prompt a vicious murder of you, or any nice white person that you love, in cold-blood.

And what does the 911 dispatcher tell this nice white lady, this former teacher, to do as she cries at the sight of Trayvon's dead body. He says: "If it's going to make you emotional looking out the window, then you should walk away for now."
Don't look. Don't react APPROPRIATELY -- by grieving this teenager's death. Retreat into white racial denial. 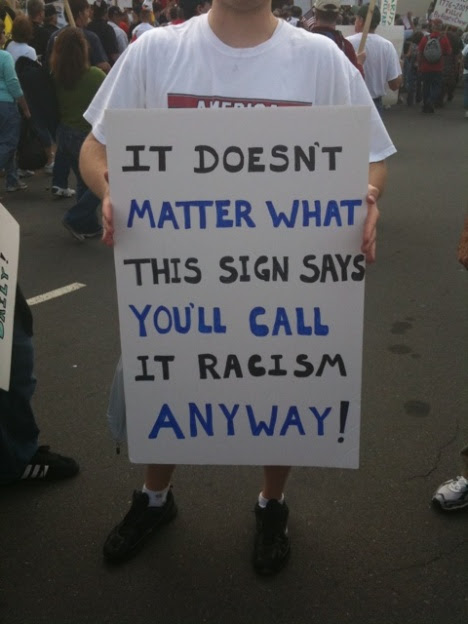 The same kind of white racial denial that killed Trayvon Martin.
I hope to God that white denial will not prevent Martin and his parents from achieving justice in a country and a state with a (so-called) criminal "justice" system that is institutionally racist -- as white supremacist in ideology (however hidden) and practice since its inception. (The latter statement hyperlinks to a video interview of Michelle Alexander, author of the New Jim Crow).
The 911 caller says that she "wish[es] I could have done something for the person. When someone yells for help you feel like you wish you could have helped the person." (crying)
I wish police & wanna-be-police would stop killing brown people. 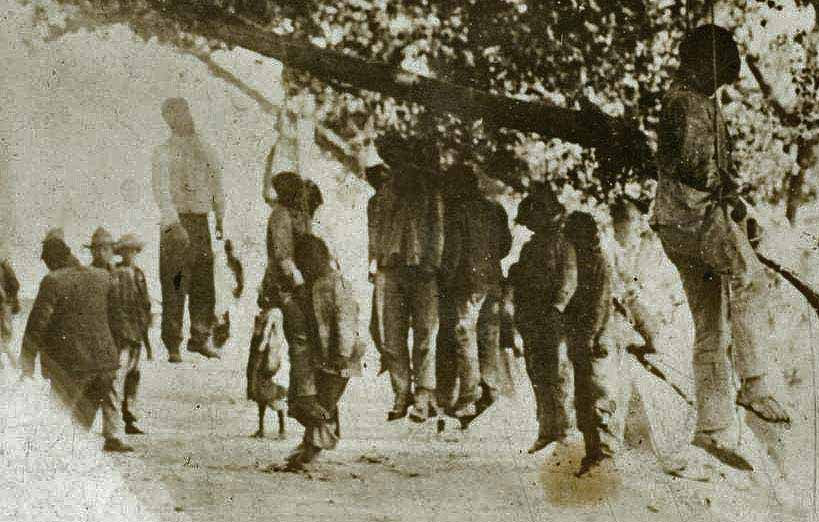 I wish the known & unknown 1000s upon 1000s of slaughtered children, women, and men had equal access to the U.S justice system.
I wish that Trayvon's death will matter to more than just his friends, family, and those who already see the injustice done to him.
I wish Trayvon's death, and it's significance, would be engraved in our national memory. Along with all the others... so many others (Aiyanna, Brisenia, Sean, Oscar, Tarika, Kathryn, Barry, Amadou... too many... too many...)
I wish there would be no more murdered Trayvon's.
(VIDEO: slam poem/call to action honoring the legally lynched)
I know... it's just a wish.
Posted by butchrebel at 7:45 PM

Wild West law being used by Whites to legally gun down Blacks!

I'd even specify that it's "white law" being used to gun down Blacks.

Being enslaved by us Europeans was the best thing that ever happened to you Negroes. Now all white children have to deal with this animalistic fallout. It won't last forever colored people...

Not only are you a self-identifying white supremacist.

You're a cowardly one at that -- hiding behind the anonymity afforded you on the internet...

Use your name, coward.